Just wanted to give you the next copy of our ezine. 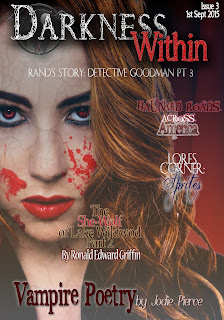 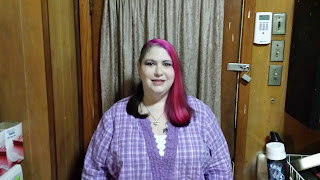 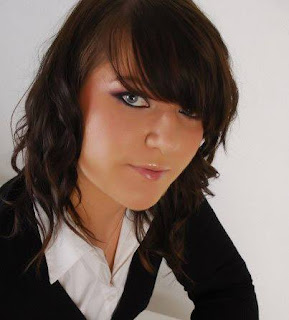 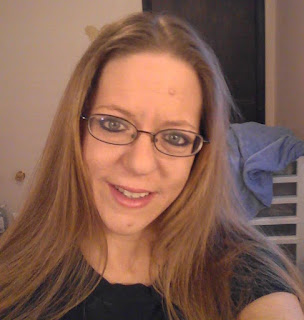 2015 All rights reserved, including the right of reproduction of this ezine in part or in whole.

A wise man once said: “There is not a step in the world where someone at some point hasn’t died.” That’s a lot of deaths since this big blue marble was formed.
Hauntings have been reported in fields, graveyards, houses, businesses, pretty much everywhere. The one place that always gets my attention is the open road. Imagine driving down the road some lonely night and seeing someone, or something waving and smiling at you. Or calling you by name. Sit back wary traveler as I share with you some of the stories I have collected over the years about the dark side of the streets.

There is a stretch of road out west that bares the nickname “The Devil’s Highway.”  Strange lights in the sky, static, or “White noise” coming over the radio, sometimes with a message from beyond, and in some cases, unwanted passengers.
A trucker’s route took him down the Devil’s Highway, which spooked him to no end. One night while driving his headlights began to flicker, the interior lights took on a ghostly blue glow and the temperature inside the rig dropped to nearly artic. He noticed something in the corner of his eye and as he turned his head and saw a man, dressed in a ragged trench coat and cowboy hat sitting in the passenger seat. The man slowly turned to face the trucker with cold, blood shot eyes. His hair was straggly and he had a matted beard. His mouth opened, exposing a row of rotted teeth. The man spoke, but there was no volume to his voice. Not even a whisper. The ghostly passenger turned his attention back to the road ahead and dissolved into the desert night.

On the east coast, there is a Bed and Breakfast located next to a very sharp curve. One night a newlywed couple decided to leave the b and b and go for a night drive. A few minutes later the groom ran back frantically calling for help. They missed the curve and wrecked the car. Emergency services were called and some of the staff ran down the road with the groom in hopes of helping the injured bride. When the staff found the car, both the bride and groom were inside, both quite dead. For several nights after the event, the groom could be heard, running down the street screaming for help.

And then there’s the hitch hiker in the mid-west,   who can be found on rainy days, hoping for a ride. The driver will pick her up, and as they head into town, she vanishes out of the car; only to be seen again in the rearview mirror, standing in the same spot, thumb out for a ride.

Be warned, wary travelers, as to whom you pick up in the dead of night. Because the dead in the night might be waiting for you. 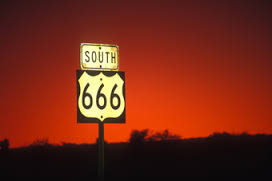 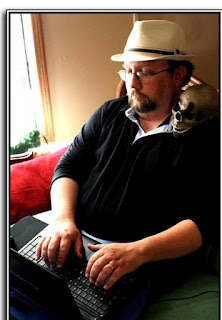 Thom Futrell is a horror writer living in Jackson Michigan. He has been in more than sixty publications and has four films under his belt. He writes under the name T.G. Reaper. 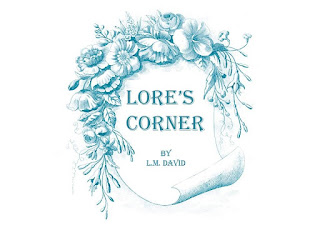 Lore’s Corner: Sprites
What is a Sprite? Or a Fairy? Or Pixie?
I once wrote a story that had a Wood Sprite. At the time, I had no idea what the difference between Sprites, Pixies, and Faeries was. Now, I know. It seems Sprite is a general term whereas Pixie and Fairy are specific. 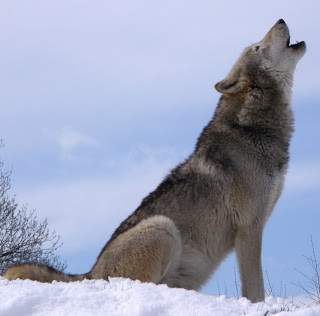 The She-wolf of Lake Wildwood
Part 2

Kurt wakes up the next morning as the light shines through the corner of the blinds. His wife Diane has already left for work and he only has a few more hours until the boys usually wake up.
“At least I’ll have a little bit of peace for a while.”
He gets out of bed and walks into the bathroom to relieve himself. He presses his hand against the wall as the yellow fluid flows he lets out a sigh of relief and closes his eyes. His stomach rumbles as he flushes the toilet. Once in the bedroom again he makes the bed while trying to decide on breakfast.
“I guess I’ll just make the usual Saturday morning pancake breakfast for the boys. I better go get the newspaper first though.”
Before leaving the bedroom he puts on his house coat tying it around his waist. Then he walks out of the house to the end of his driveway. When he bends over to pick up the newspaper he hears a door close next door. When he looks up he sees the same girl from last night, step down from the porch. He cannot help but stare as yoga pants and a tank top cling to her body as she stretches. Her eyes catch his and she gives him a smile along with a wave.
“Good morning.” She calls out.
She jogs over to him in the driveway extending her hand in greeting which he eagerly accepts.
“Hi my name is Tabetha.”
“Nice to meet you I’m Kurt. I hear from my wife that you’re all college students living in that house.”
“Yes sir we start on Monday. I have to start looking for a job though to pull my weight. The guys have online jobs and work from the house but I’m not good with computers at all.”
Kurt’s eyes start to wander until she clears her throat. His face turns red and he turns his eyes to the ground.
“Well how good are you at making pizza?” he asks.
“Pretty good actually, back in my hometown in Pennsylvania my first job was at a local pizzeria. The owners treated me like their own daughter and I miss that.” She says.
“Well why don’t you come to the Pizza Hut in town and fill out an application. I’m the hiring manager there so I’ll be able to help you out.’ He says.
“Really? That would be so wonderful! I really appreciate that.” She says with a smile before hugging him.
At that moment his wife pulls into the drive way. Kurt sees her and steps away from Tabetha slowly. Diane steps out of the car giving Kurt a disapproving look as she crosses her arms. He can feel his face grow hot from embarrassment.
“I’ll see you Monday then and thank you so much again.” Tabetha says to Kurt with a smile. “Good morning ma’am.” She says to Diane.
She turns and starts jogging down the road leaving Kurt and Diane alone in the driveway. Kurt keeps his eyes glued to the concrete driveway avoiding watching the girl in tight clothing jog awhile and to avoid the intense glare that he feels coming from his wife.
“Hi honey, you’re home early.”
“They switched my schedule again and forgot to let me know. So you can’t stand college kids? Couldn’t stand them when you were one? So what were you doing all over that one?”
“It’s not what it looks like honey. She needs a job so I offered for her to come fill out an application. She just gave me a hug that’s all.”
“All I have to say is that I’d better not catch you with her hands all over you again. I’m working tonight so you will be on your own with the boys.”
“Honey the big fight is on tonight!”
“I’m sorry but what do you want me to do? I’ve got to work.”
Diane leaves Kurt standing there in the driveway and walks into the house.
“Great now I am in the dog house.”
He walks slowly up the driveway knowing that he’s getting the cold shoulder for the rest of the day. Once he is in the house he slowly closes the door behind him.

Later that evening.
Tabetha is sitting in a car with a date she had for the evening right outside of her house. He tries to feel her breasts as he kisses on her neck but she pushes him away.
“Cut it out I’m not that kind of girl.”
“Maybe you are and you just don’t know it yet.”
She slaps him in the face and gets out of the car.
Diane pulls into the driveway and watches Tabetha yelling at the boy in the car.
“You can forget my number Bobby I never want to see you again.” she says and slams the door.
Diane gets out of the car and enters her quiet house. She notices Kurt laying on the living room sofa asleep before walking into the kitchen for a drink. On the fridge she notices a note from Kurt and reads it.
I’m sorry about this morning Diane. Dinner is in the microwave and the boys are staying over at a friend’s house. I love you.”
She smiles and peeks back into the living room. She walks over to him and kisses him on the forehead.
“I love you too.” She whispers. 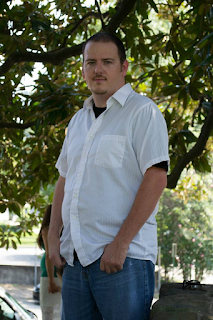 Ronald Edward Griffin is a native of Macon, GA where he was born and raised. He is an accomplished Author in his own right and is always working hard on something. He has two children whom he hopes to pass his writing bug on to them.

Night falls across the land
And shadows make their return
They are out there lurking
Waiting for their next prey
Beautiful pale skin shown only by the moonlight
Their teeth and nails elongate
They wait for you or me to pass by
And then they sink their teeth in
Absorbing the blood
Letting it dance around in their mouth
They are once again rejuvenated.

Trying to blend into the evenings' events
You will never be from our era
With your ancient mannerisms and speech
Many find you odd and freaks
Where I find comfort in you
I long for your embrace
Your kiss of death
And eternity of peace for me. 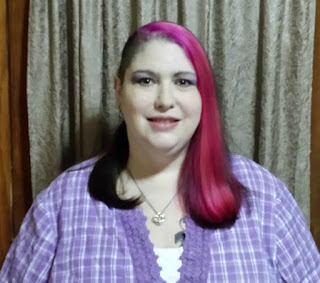 The Vampire Queen1 aka Jodie Pierce has been writing since Jr. High School but was unsatisfied with her teenage romance stories. One day, a friend handed her an Anne Rice book and she found her inspiration. She’s been writing about vampires ever since. 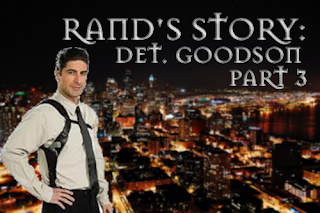 About the Author, Brien O’Raighne

He is a connoisseur of sci-fi and paranormal films and books. He, also, lives in Houston with his son.
You can contact him at darknesswithin.boraighne@gmail.com.

**If you'd like to contribute an article or become a columnist, please contact me at darknesswithin.jpierce@gmail.com. Also, please feel free to leave a comment here letting us know what you think of the ezine! We love to hear from our readers!!!!

Posted by Unknown at 3:00 AM No comments: